The contents of an interview the NHK International Broadcasting Station had with us has been broadcast in English on the NHK WORLD-JAPAN News.

www3.nhk.or.jp
New Tech Helps Construction Industry - BIZ STREAM - TV | NHK WORLD-JAPAN Live...
With the 2020 Olympics and Paralympics set to commence in Tokyo later this year, Japan's construction industry is being pushed to its limits. A national labor shortage is adding to the challenge, so construction companies are now turning to technology to maximize efficiency. From smart excavators that can be operated by almost anyone, to MR (mixed reality) goggles that can display construction plans on demand, this episode introduces some of the cutting-edge technology th...
We have transcribed the contents recently broadcast on NHK WORLD-JAPAN News. The program is no longer available on on-demand TV but the contents can be read in this text.

(MC)
Up next we have global trends.
Printed circuit boards are inside all the electronic gadgets we love and use every day.
Unfortunately there is a downside, producing circuit boards generates a massive amount of toxic waste that ultimately needs processing.
Now a Tokyo based startup has come up with a method that minimizes the environmental impact

This venture firm, located on the side street in central Tokyo makes printed-circuit boards, but in a radically different way.
This is how the components are usually made.
First, the board is laminated with copper foil, then the surface is coated with a thin layer of what is called photoresist,
the pattern of the board is made by exposing the photoresist to light.
Finally, various solutions are used to remove the copper and the remaining photoresist.
The entire process generates huge amounts of liquid waste.

(Shinya Shimizu：Co-founder & CEO,Elephantech)
Some companies are even shifting their factories that have high environmental impact to countries with lax regulations.

(Narration)
The venture firm’s manufacturing method involves a high-performance inkjet printer that uses tiny silver particles to draw them lines.
The lines are thin pleaded with copper so they will conduct electricity.
The company says it’s two step method produces only one 13th, the amount of liquid waste.

(Shinya Shimizu：Co-founder & CEO,Elephantech)
This technology is very eco friendly.
I believe it can become indispensable in the production of electronic devices.

(Narration)
A major Japanese manufacturer has teamed with a venture firm.
It has provided factory space and manufacturing knowhow so that mass production can start.

(Shinya Shimizu：Co-founder & CEO,Elephantech)
If we had to create the entire system from scratch on our own. We would have needed more time, money, and know how.
Being able to work alongside a bigger company is an excellent opportunity.

(Yoichi Kodama：Mitsui Chemicals)
We believe this is a great tide of innovation.
The firm is trying to change the world with its new technology

(Narration)
The venture firm is also working on three dimensional electrical circuits.
A circuit is printed on flat film, and then turned into a 3D structure.
Straight copper lines may break when they expand.
But those made in a vending pattern will stay intact.
This technology can be used to streamline the electrical wiring inside automobile doors and reduce overall weight.

(Shinya Shimizu：Co-founder & CEO,Elephantech)
Cars are sometimes called electronic equipment, you can drive. More electrical wiring will be needed as 5G communications and the Internet of Things, come online,
One passenger car already has about 100 kilograms of wiring.
Without making this lighter, the fuel efficiency of electric cars will be compromised.

(Narration)
With concern for the environment growing alongside demand for smaller and lighter electronic gadgets.
One venture firm is reminding us that it’s often what’s inside that counts.

(MC)
Well this is good news. I mean, many of the things we use have circuit boards in them and we definitely need to be aware of the environmental impacts here.
What do you think of the startup? 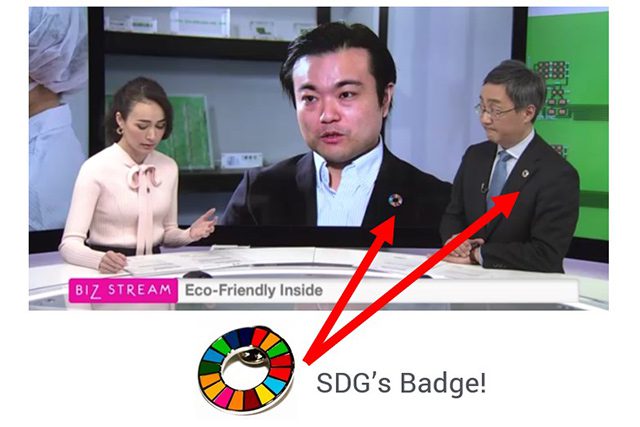 (MC)
Ah, okay. There it is right behind us

(Guest)
This is the SDGs, which is a sustainable development goals, which was initiated by the United Nations in 2015, and there’s 17 goals and do leave nobody behind by the year 2030.
And when it number six is clean water. Number 12 is responsible consumption and production, so obviously that this company is right on track.

(Guest)
And it’s not about restricting the company’s you see you guys you can see it’s actually creating new value right.

(MC)
Yes. Yeah. And you know, I think there’s a lot more pressure on companies to be more aware and mindful of the type of waste that they’re letting out. In your opinion, is Japan doing enough to go in that right direction?

(MC)
Are we seeing a lot more of this happening?

(Guest)
I see other cases actually so yes I think it will increase more and more. 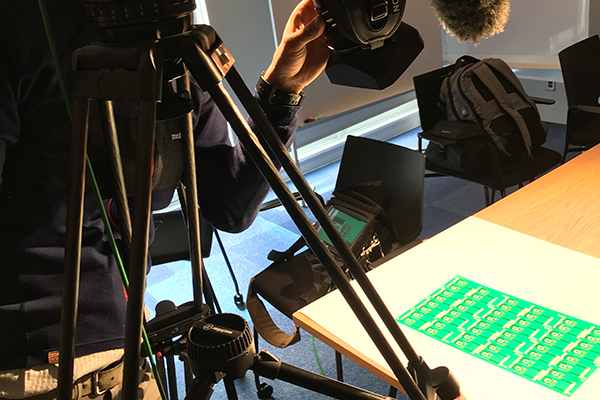 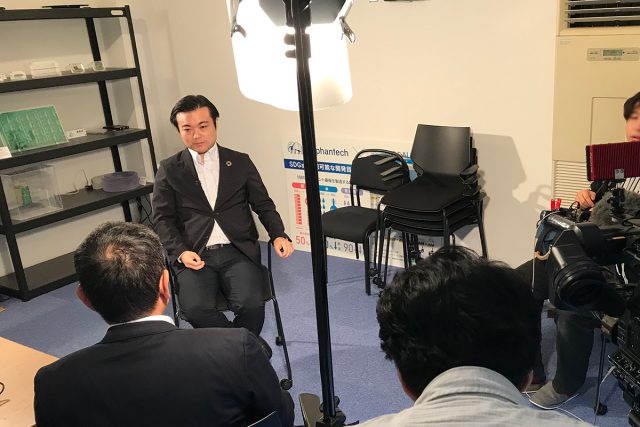 www.elephantech.co.jp/pickups
NHK WORLD-JAPAN News Broadcast（Summary）
・Many tech companies have a bad reputation for sustainability due to the short lifespans of their products and a lack of recycling.・But there's a lesser-known contributor to environmental waste in the industry -- the printed circuit board that's at the core of our electronics gadgets. Making it produces a vast amount of toxic material that needs to be processed.・We visit a Tokyo startup that's helping to tackle the problem. It has developed a more eco-friendly way to manufac...

www.elephantech.co.jp/pickups
The future of electronics：Shifting from "dissolving unnecessary parts&q...
About Elephantech's manufacturing method （Pure Additive™️ processing）Taking the example of printed circuit boards, the conventional manufacturing method was an extremely long process in which copper foil is manufactured, laminated with film (production of CCL), and laminated with photosensitive materials before the desired copper pattern is achieved by dissolving and discarding the copper foil from unnecessary parts by exposure, development and etching.Our process achieves the desired ...
previous post link
next post link