Hello there! I ended my previous post by commenting on how I was going to look into what everyone had to say on the utility of inkjet in making biosensors.

But before I get into that, I thought I’d share a little fun story about something that happened to me recently.

The enzyme behind the blood sugar sensor

So, I was doing some research on what biosensors are actually used for and, although there are all sorts of biosensors, it became apparent that the most familiar or the most commonly used is the blood sugar sensor. I myself have an acquaintance who has diabetes and uses a blood sugar sensor so I was able to immediately picture it in my mind.

The image below is of a blood sugar sensor that can be easily found on Amazon. As you can see, these have two poles. There are actually three poles to the area that actually plugs into the machine, but two of these are generally shorted out immediately and are just devices to make sure that the sensor strip has been correctly plugged into the machine. You can read all about this in this patent here. 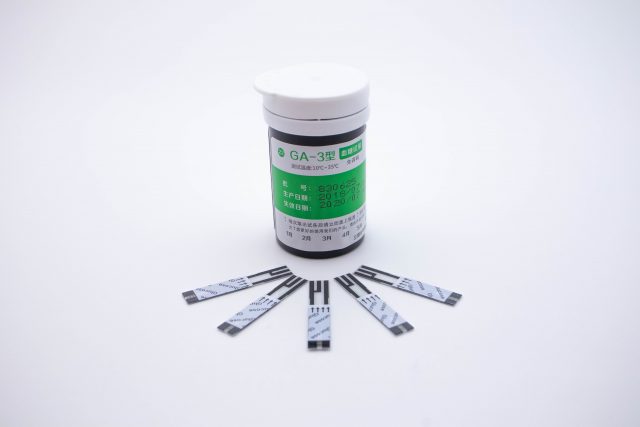 Now, we ourselves possess a three-electrode electrochemical sensor, as illustrated below with a gold electrode and a silver/silver chloride electrode formed on top of ceramics. 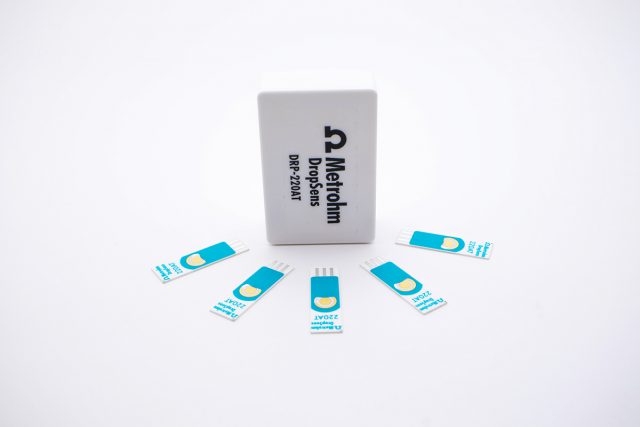 We have previously tested the performance of our own electrochemical sensor by connecting it to this potentiostat made by Metrohm DropSens and have verified that it functions well enough. Below is the sensor that we tested. 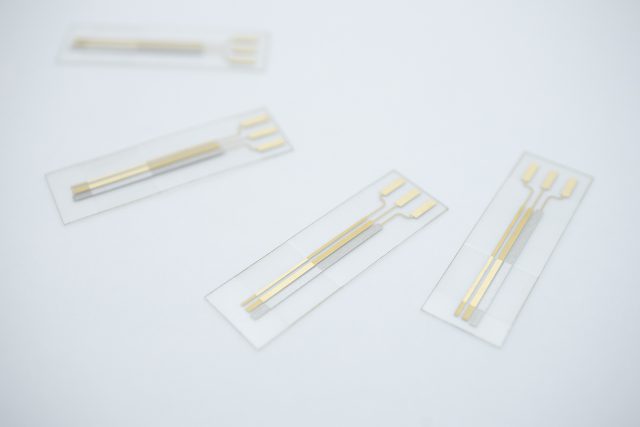 As a side note, this FreeStyleLibre sensor linked here is an always-on sensor and, as someone who is incapable of thinking deeply without a constant intake of sugar, a sensor I would like to try out one day.
How I’d love to analyze spikes in my blood sugar levels! I actually have no idea if this sensor is a 3-pole electrochemical sensor, but perhaps I should get one for future research?

Anyway, about a year ago I figured that I’d try and make a blood sugar level biosensor and started buying the materials. In fact, I had actually gone as far as making the sensor but couldn’t make any announcements as I had yet to verify its functionality on myself… And of course I purchased some enzymes at the time too. What I purchased was glucose oxidase from Aspergillus niger, and it was really pricey! Funny thing is, I had always read it as “Asparagus”. I had, rather foolishly, always believed that the enzymes I purchased were produced from asparagus, so imagine my surprise when I couldn’t find any asparagus-produced enzymes in my most recent research! It was only upon digging up the original paper and having it translated that I realized that it was AsperGILLUS and cultivated from malt! That’s right, the A in A. Oryzae stands for Aspergillus. In terms of cultivation, it can be cultivated from its close friend A. Niger, and that was the identity behind the aforementioned glucose oxidase.As a fan of the anime series Moyasimon: Tales of Agriculture, I wish they’d just call them Oryzae or Niger!I’d never dreamed that my anime knowledge would come in handy in such a way, but I guess that just shows that manga and anime teach you all that is important in life.

Now, let’s move onto the explanation on why inkjet is wonderful with regards to the drying which is problematic when printing multiple enzymes such as glucose oxidase (GOX). For this, I first did some research on the temperature and duration needed to dry GOX.

First of all, the term “immobilize” is often used in conjunction with GOX. Incidentally, the GOX I purchased the other day was also delivered in the form of yellow powder in a small case that needed to be diluted in water before turning into ink. In fact, simply coating GOX on the surface will result in it running off when it comes into contact with the target solution, and so it is “immobilized” to prevent that from happening.Another term that is often used is “modification”. Modification is used to describe the act of adding functions by processing the surface of the electrode in some way. According to Nonaka and Fuchigami (1985), the term “modified electrode” came to be recognized and widely used some 10 years earlier, so from around 1975. Knowing this term will make it easier to understand various documentation on biosensors.

There isn’t much I can say on drying methods when immobilizing GOX as there are many different methods, but, referring to a paper I read rather recently, Wang et al. (2012) state that inkjet printing a GOX-containing ink and letting it dry for 24 hours at 25˚C gives good results.
To be precise, in the paper they compare results from having dried the ink for 24 hours at 4˚C, 25˚C and 37˚C, and it is shown that, of the three, 25°C is the best for drying as the functions aren’t activated without printing and drying in a way that completely covers the surface of the electrode.
The problem at 4°C is the coffee-ring effect. This is a common phenomenon when drying ink and, needless to say, is also something we have to be wary of when drying silver nano ink. Should you want to learn more about the coffee-ring phenomenon, I can’t recommend this article highly enough as it is really easy to understand.

I cannot but feel intrigued by how a phenomenon of stain marks appearing on prints and the like is a theme at the forefront of science and technology. In this paper, they seem to have dosed the surfactant to perfection in order to achieve both optimal ink discharge from the inkjet head as well as the ability to have the ink spread evenly upon landing on the carbon-made electrodes which are prone to repelling ink. This is just astounding work. Anyway, from this research we can see that it’s best to not go beyond 37˚C, but it still takes 24 hours.

So, that was an explanation on why the drying of enzymes takes so long with regards to its needs to be done at low temperatures. For my next article, I will be looking into situations in which multiple enzymes need to be printed and what that implies.

www.elephantech.co.jp/pickups
Launch of the Additive Manufacturing Center (1)
Hi, this is Masa from Elephantech. We established the Additive Manufacturing Center ("AMC") in April of 2020 and, having in June welcomed Mr Kawamoto on loan from Mitsui Chemicals as the center's director, we're all set to start operations.Among our existing services is the Ink Discharge Evaluation Service. Mr Saito, who is in charge of this particular service, joined us following a visit to our company on a tour organized by the Imaging Society of Japan.As for the AMC, we...

www.elephantech.co.jp/pickups
Launch of the Additive Manufacturing Center (2)
Hi, this is Masa from Elephantech. I'd like to follow up on my last article in which I touched upon how we regularly read all sorts of research papers and how we've come to realize that there is one key word that keeps popping up in the research conducted by searchers who continue to hack home printers to take on various challenges (we really resonate with your work!) That key word is biosensors.Looking at various research papers on biosensors, we quickly realized that many of them ...

info.elephantech.co.jp
AMC(Additive Manufacturing Center)
AMC is a co-creation organization that closely works with customers through trial and error, from casual experimentation to mass production. AMC hopes to bring AM(*) inkjet manufacturing to more fields through this endeavor.